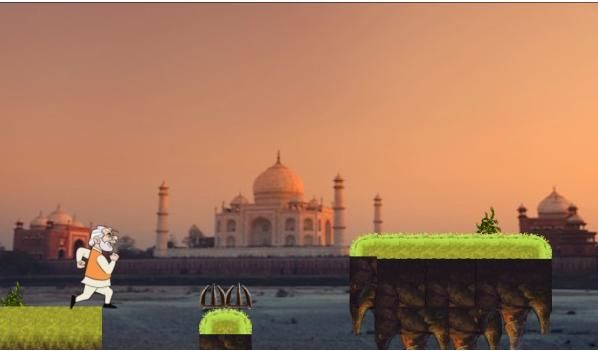 We have previously seen Narendra Modi inspired SmartNamo phones & now it seems other trades are capitalizing on the politician’s trending fame, with a Modi themed mobile game being declared, called Modi Run.
Modi Run is an Android platform game that is available on Google Play Store for free. One lakh people have downloaded it. Launched on 28th July, 2013 & 6.63 MB in size, the power of the game is to help Modi win the election by achieving the popular Ballot Box. Google’s Play Store data proves Modi Run game has been downloaded more than 100,000 times, in recent times, Modi run is the top downloaded game on mobile phones.

Help Modi through all the states & collect the votes to create him win the election and become PM of India. Based on the classic Mario series, in this game Modi’s character has to beat difficulties & gather diamonds at different stages, which are, smartly enough named after various states of India. The states are Gujarat, Maharashtra, Uttara-khand, Rajasthan, Kerala, Karnataka, Andhra Pradesh, Bihar, Uttar-Pradesh & Tamil Nadu. After making Modi win a state, the gamer makes him jump to a new state and lastly makes him achieve the Ballot Box, following which he is confirmed as the Prime Minister of India.
Modi Run has fantastic graphics that are attracting the geeks of the gaming & political world alike.
Software developers have been developing all types of latest games & apps in recent years as Indians increasingly shift to smartphones of companies like a Samsung, Apple, Micromax & Karbonn.
Kumar Mettu, chief executive app developer said the company came out with Modi Run because they believe Modi the most popular Indian personality for middle-class youthful people. “We started the games based on politics as a way to check the market,” Mettu told in an email message.
Many Modi followers have been eagerly playing the game & enjoying it.
There is also a disclaimer by the producers that reads, “This modi run game is not authorized by Modi or BJP. This game is purely for entertainment made.
Sheetal Pande, mobile game enthusiast said, “There’s nothing out of the world regarding the modi run game. Gamers will not like it, but Modi lovers will have fun as they will think they are serving the Gujarat CM win the game & the Lok Sabha polls ending up as PM in 2014. As a concept it’s a great plan by the producer Dexati.”
Help Modi win the election by running through all the election. If you are a fan of Modi or a supporter of BJP this is the app for you.”
Save