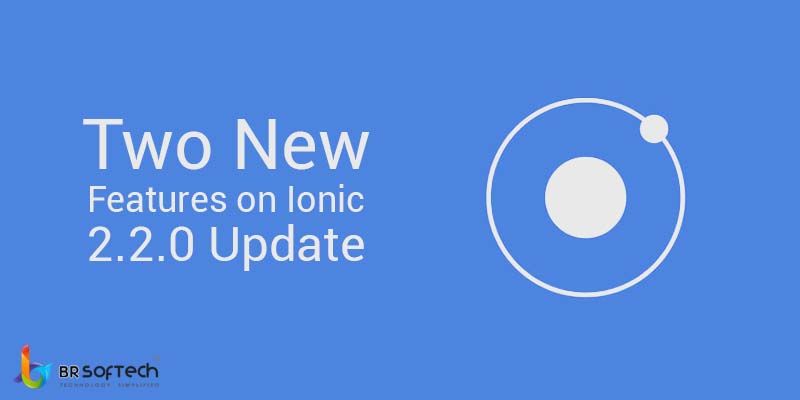 The developers who all are working for the enhancement of the mobile applications need some concession in the complexity of the development. For that purpose they uncover so many softwares that make their work more easy and flexible. Likewise there is an ionic 2.2.0 update for the mobile developers which reduces their adversity. This update will leave you totally shocked by the awesome functionality given by the ionic 2.2.0.

This contains some bug fixes which helps in solving the problems on an open source as it is a very big platform for the developers to develop the mobile applications. It acts as a savior for the developers and has lot of potential in the terms of technology. It was proposed with an idea of making the developer’s complexity easier than before. Ionic is an open source SDK supposed to be used for the hybrid apps development. Hybrid app development can be done in various ways using the HTML, CSS, SASS etc. Ionic performs as a mobile web framework used for the building of hybrid apps. These apps are used by all the users and like in native app there is no specific operation. This can be build over all operation systems but the development speed used to be low. Once, ionic got released hybrid apps have become very easy to control and develop. The Angular.js Development Company has created a new era of software development tools. The specialty of ionic is that an app can be build on this interface and eventually customized into android or iOS. The supportability of ionic depends upon the versions of the operating system. For example for android it supports the lollipop version and the latest version naugat. For iOS platform it supports iOS 7 and versions after iOS7. It gives high performance when it is mixed with the native app mobile code. It is easy and free of cost to download so it is easily available in the market. It is a notice for all the mobile apps developer that don’t leave such an amazing module.

A business can make more revenue if the development is done as soon as possible. The development depends upon the platform on which the app is developed, testing process, releasing cycles, adoption by the audience etc. The all new ionic 2.2.0 helps in the development very soon which leads to the high revenues of the business. It has proved itself to be best from other frameworks used for the mobile application development. Now the ionic is ready to be seen on the PCs also. It has come up with two divine features:

This feature totally deals with the display of the apps. The grid system was not that efficient with the 1.x update but now ionic developers can easily fix the display grid with the help of ionic 2.2.0. The functionality helps in fixing the right proportion of the display in both mobile devices and the desktop. It used to be a major concern during 1.x. If you want to add split pane to you screen to have 2 views on a larger screen then just wrap your root component by using any attribute.

As ionic has updated it’s latest version as angular 2.4.8 now ionic developers can use it for many purposes as now it is compatible with the performance bugs. All troubles of angular is been over with the new update of ionic 2.2.0. The angular version 2.4.8 is now ready to use as it has been cleared in the testing process. So use it as much as you want.

This is a bang on feature for the navigation sector as on normal mailing system we can’t navigate individually the elements but on ipad mails can be individually navigated. This is an add on feature for the ionic developers that they can create that image on their system as well which was only available on the iOS. The specialty is that each element will work with it’s own ion-nav.

If you are still using the old version of ionic storage then update it with 2.2.0 as many of the features are not compatible with the old ionic storage. The ionic community has fixed the problem of storage as well as bugs which were creating issues related to refresher, components, menu, tabs, radio, infinite-scroll and view-controller. Now it;s more easy for an ionic developer to work the apps and store as much data as he wants.

Ionic developers were facing many problems but after the release of the latest version of ionic 2.2.0 so many bugs are fixed and helpful to develop the app soon. The picture clarity problem is also over. The storage problem is also done as we can create a big SQL database to store many apps data at some time of so many apps. Download today itself the ionic 2.2.0 and use the add on functions.