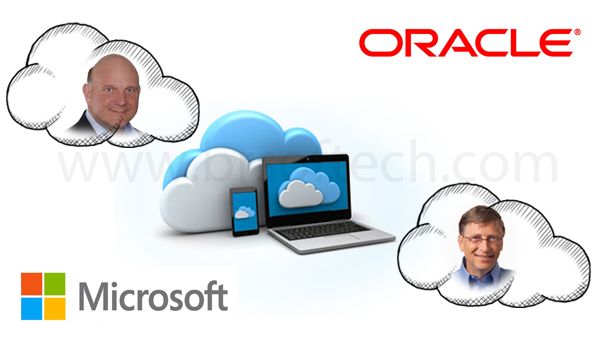 The biggest names of IT industry Microsoft and oracle announce their joint press conference on next Monday. Microsoft’s CEO Steve Ballmer, its Azure chief Satya Nadella and Oracle’s president Mark Hurd will present in this press conference. It seems Microsoft and Oracle planed to working on something together and now they disclose it to the public. This press conference will happen just two days before Microsoft’s Build developer conference which is scheduled to kick off in San Francisco.
Oracle CEO Larry Ellison said that ” Next week, we will be announcing technology partnerships with the largest and most important SaaS (software-as-a-service)  companies and infrastructure companies in the cloud. And they will be using our technology, committing to our technology for years to come”. He added that Microsoft will be one of those companies.

Oracle will launch 12c database among cloud development companies. To assure the success of it, oracle wants to figure out the new partners for partnership. Salesforce.com and Netsuite are already major Oracle customers; here it will be worth seeing that, will oracle upgrade them to 12c? 12c is a pluggable in-memory database, which appears as similar to SAP HANA.
So what could be going on? Industry observers analysis that might be the two companies are bonding together to develop their own big data initiative to compete with Pivotal and its partner GE. Or it would be arise as a new collaboration? But Microsoft creates interest on the point, as could it inset Oracle 12c for becoming available on Windows Azure.
Microsoft Build developer conference starting in the middle of next week, for Microsoft next week will be a enormous week for its Azure services and for its corporation future in the cloud storage & computing.
Next week will truly be spectacular!