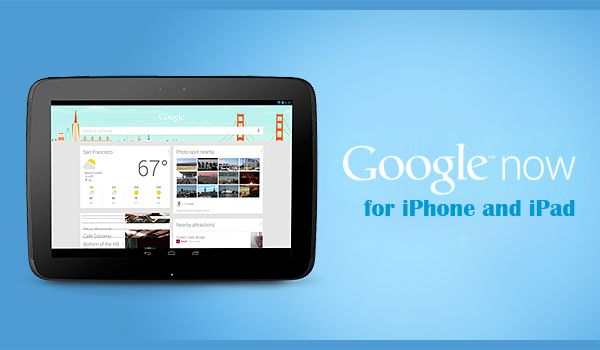 Google launched “Google Now” is an intelligent personal assistant developed by Google that is available within the Google Search mobile application for the iOS operating systems and android its own version of Siri on Apple products called, Google Now, a virtual assistant on Monday. It will also be available to iPhone and iPad after then available for Android the last 9 months. Google has come up with its new version of a Smartphone personal assistant. In Instead the Android buddy is just called ‘Google Now’. In this your friend Now takes everything it knows about you from all of your activity across Google’s products and uses that to make suggestion to you.
The Google Search 3.0 debuted in the last year at Google I/O conference and this was availed to all the Android devices. However, this success with the new iOS version, it is now going to be available to iPads and iPhones. All features of Google Now on iOS:

Advantages of Google Now are:-
According to Tamar Yehoshua, Google Now has an advantage of various different from technological scopes. It uses the text-to-speech output and the knowledge of graph and the technology stack to provide its predictive search and all the voice recognition features. The prime feature of Google, the Google Now will be of competition with the Apple’s Siri.