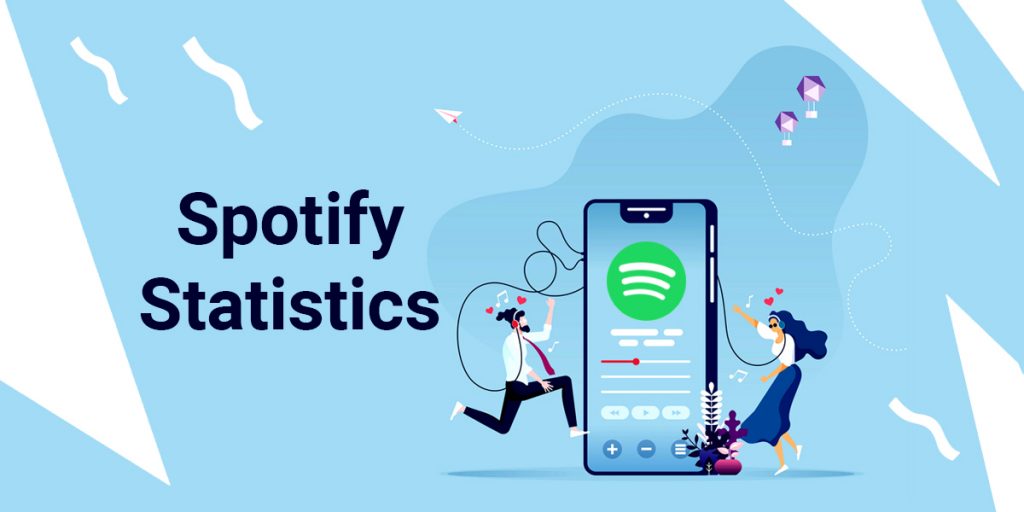 Use Spotify to listen to your favorite songs for every mood and all the occasions.

Spotify is Sweden’s most popular music streaming app founded in 2006. Its offering digital music service all over the world giving access to millions of people around the world. Spotify enables you to listen to your favorite song anywhere, anytime.

Get insight into Spotify by visiting its website: https://www.spotify.com.

With Spotify, it’s simple to find the right music or podcast every moment using mobile phones, tablets or computers. Let Spotify play the best song for you and enjoy the collection of millions of unheard songs of all time. Spotify allows you to play any track, any artist, or album of your choice, enabling you to create your own playlist.

Its tremendous growth has shown incredible growth. According to Statista, As of the third quarter of 2019, Spotify had 113 million premium subscribers worldwide, up from 87 million in the corresponding quarter of 2018. Spotify’s subscriber base has increased dramatically in the last few years, climbing from 52 to 113 million in under three years. 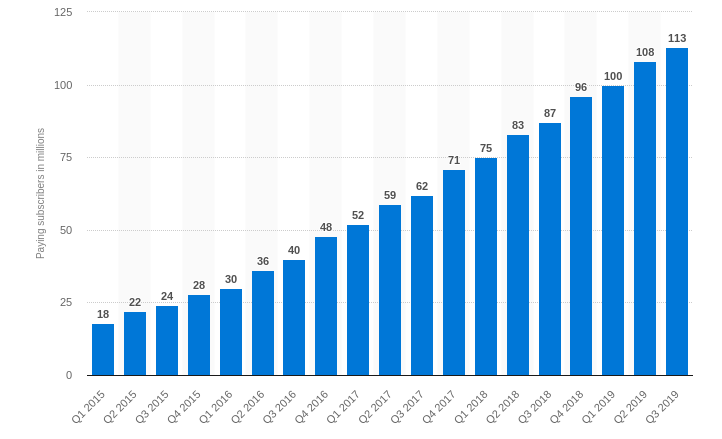 This fantastic platform allows users to browse through the music catalog licensed through multiple record labels. It enables users to get access to a variety of music content like from Warner music group Sony, EMI, and Universal.

Its user-friendly interface enables users to search their desired song by album, artist, genre, or pre-curated playlist. In May 2019, Spotify market cap was $25 billion, and since then it has accelerated the pace. Its uphill jump towards the foreseeable future is quite tremendous.

Spotify is so far one of the most loved and welcomed music streaming service apps. Its vast collection of lucrative songs, unlimited skips, access to the new song release, deals on Hulu and a lot more attention-grabbing features make it stand out from competitors.

Download the Spotify app for free and enjoy the essential services. It can be used on mobile, desktop, or tablet with ease. It allows people to listen to their most loved songs without coughing up any cash. Its ad-supported service is free of cost offering users a fantastic experience.

Spotify tiered premium subscription model is for paid users. It allows users to listen to unlimited songs without any interruption or advertisement. Not just that, it will enable paid users to save or download songs for offline use. As mentioned above, As of the third quarter of 2019, Spotify had 113 million premium subscribers worldwide. It clearly shows the popularity of this advance music streaming app.

Spotify 2019 stats represent a consecutive growth in the high potential market. Its definitive growth is driven by great music from skilled artists and music record companies around the world. According to IFPI, the global recorded music market grew by 9.7% in 2018 and expected to witness more growth by the end of this year.

Spotify’s annual revenue in 2018 was 5.26 Billion EUR. It has captured the market’s attention globally while offering outstanding music streaming app. For the younger generation, it has become the go-to music app with its variety of music content. It allows its users to not only listen to Spotify without advertisement but also access tracks on model allowing and save music or playlists for offline use.

Let’s take a look at Spotify User statistics and witness its tremendous growth in the industry.

The research and development cost of Spotify in 2018 was 493 Million Euros. This digital, cross-platform music streaming app first got popular in Europe and then around the world. Its continuously growing popularity assuring its future growth which will surely reflect in Spotify statistics 2020.

Spotify allows users to build their best music collection. It offers thousands of podcasts, including originals that can’t be found anywhere else or on any other channel. It comes with amazing capabilities providing unlimited access to your preferred songs.

BR Softech Pvt. Ltd. with a team of skilled professionals can help you develop a similar app like Spotify. We provide with lucrative features and high-end functionality, keeping the market trends and recent technologies in mind.

Spotify has become the world’s biggest music streaming platform by several subscribers. Its outperforming market expectations and providing users with immense music experience. There are approx 40 million tracks available on Spotify. It’s the driving force behind the growth of recorded music revenue in streaming.

Spotify is the response to the rising challenge of online music piracy. The Facebook partnership helped it increase, marking its presence around the world and making it more visible for people to recognize. It has become the most popular online music service among youngsters.

Approx 52 % of people are using their smartphones to listen to their favorite songs on Spotify and consumes 2.4MB per minute if the premium user. On average, Spotify is used for 148 minutes every day by its users listening to tracks from 40 different artists a week. 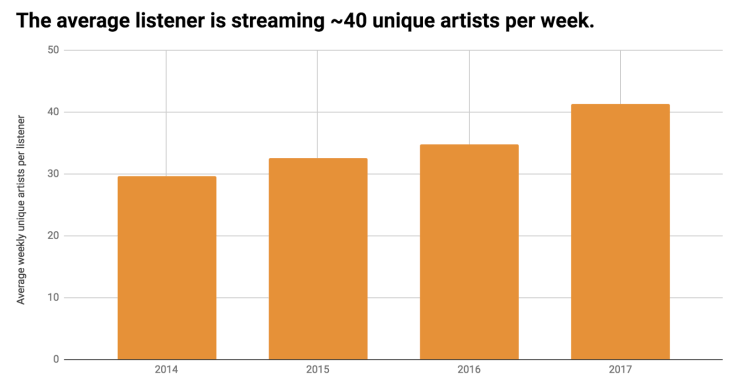 Worldwide Popular Tracks on Spotify as of October 2019

Last month, Tones and I’s Dance monkey was the most streamed track on Spotify with 41.68 million streams worldwide. The second most played song was Highest in the room by Travis Scott with 36.97 million, and the list goes on as you can see. 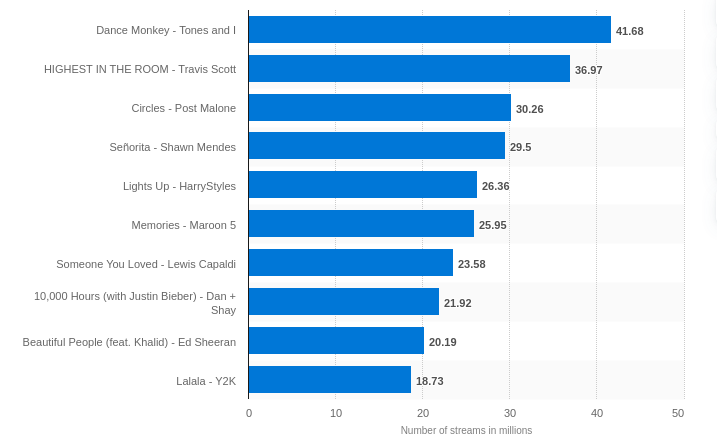 Given the hits and millions of users, Spotify has captured the attention of famous music artists. It has become a platform for artists to earn royalties. This platform is beyond the music streaming app and has changed the music industry over the last decade. Spotify consists of more than 450 thousand podcasts and might include sports and news podcasts as well.

Read more : – Cost To Build a Video Streaming App Like Netflix or Hulu?

Spotify allows users with a unique facility to upload and provide users with their devices. And, that’s the reason over 20,000 songs are added every day on the platform. On Spotify, 17 % of playlists played on are personalized.

There are around 3 Billion plus playlists on Spotify. This playlist helps you know how the content consumed on Spotify. If you are willing to develop a similar app like Spotify, contact BR Softech and share your ideas with us.

We help you develop an advanced app using trending technologies. Being a top-rated mobile app development company we help you build an advanced streaming app.  Upcoming trends and market needs are what help us understand the market demand. With that, we help you make sound decisions utilizing the information required to develop a successful app. 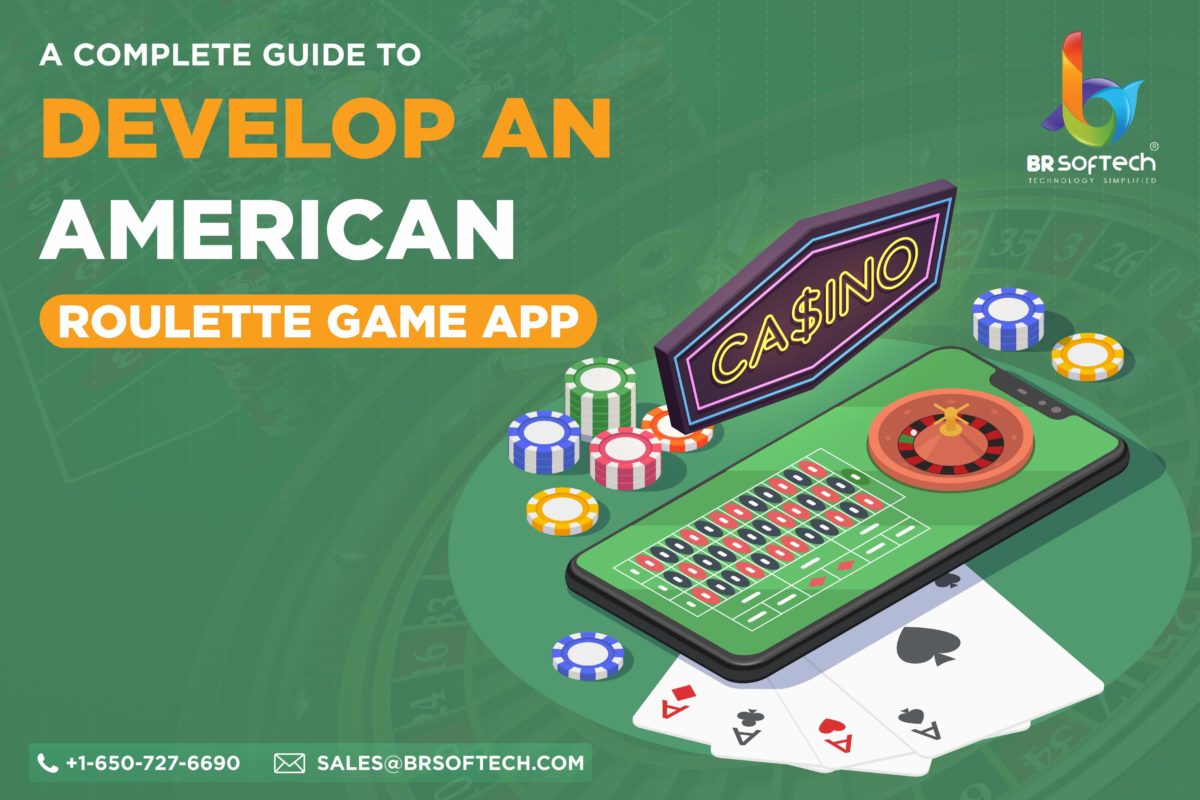 A Complete Guide to Develop an American Roulette Game App?