How to Develop Internet of Things (IOT) Applications? 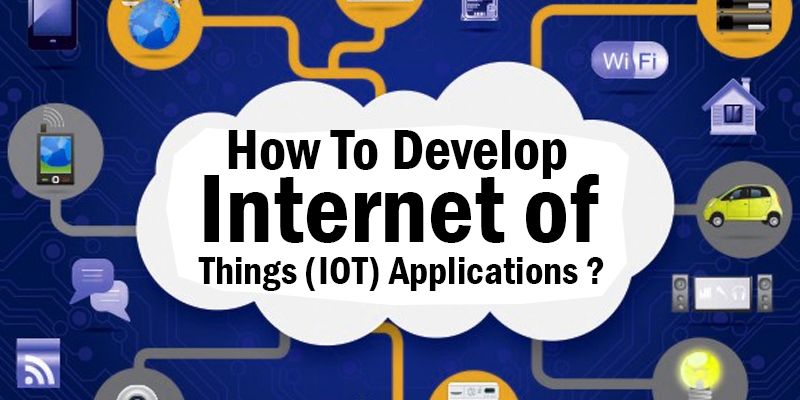 The Internet of Things (IoT) is the collection of day-to-day objects connected to the Internet and are competent to communicate with the computer systems integrated. IoT Solutions are getting advanced with each passing day at a rapid pace. Looking at the upward trend of IoT, enterprises focus on how simple it is to create their own IoT apps to benefit from them.

The implementation area of IoT applications is vast. The smart homes can manage these medical facilities intellectually that diagnose and decide the treatments automatically based on the outcomes of surveys and analysis. It is the reason why IT companies are targeting this huge portion of software development.

The best method to develop an application that can perform almost anything is managing home appliances to gather meteorological data from the sensors and manufacturing weather forecasts. The Internet of Things is detonating. Various kinds of technology and networking chips are essential for linking it to the Internet devices, right from light bulbs to the smart-watches, all have become costly now.

This IoT does the work of sending and receiving data through the network relating to various characteristics like pulse rate, temperature, light level, moisture level, or revolutions per minute. And, there are many more complex data like sounds, maintenance requirements, etc.

Many analysts state that around two-thirds of the consumers are expected to buy connected technology for their home by 2020, as per the Acquity Group (a part of Accenture); almost half are expected to buy wearable technology. Gartner’s report says that connected things will increase to 26 billion units by the end of the year 2020, which is nearly 30 times the increase of over 900 million things in the year 2009. Gartner’s report also states that the IoT app development has reached its highest peak.

For making practical use of it, things collecting and transmitting data must be connected to a system of automation. That kind of software system intelligently controls the things and the networks they use, organizes, stores lots of data they generate and processes it before it is finally practically presented to end-users.

The various platform for IoT Development:

Various leading companies provide Internet of Things infrastructure with completeness so that the enterprises can focus on developing the applications that access data supplied by “things.” These platforms are committed to accommodating companies that may commence with some finite number of users and things, and later on, it will keep enhancing to many thousands. It will take a higher level of development.

Some well known IoT platforms are ThingWorx, Carriots, Xively, and SeeControl. These platforms can interact with a wide range of “things” manufactured by a large number of manufacturers.

Some more renowned companies like Microsoft, with its Intelligent Systems Service, and enterprise software vendors, like SAP, having IoT Solutions, have also added Internet of Things abilities in their services.

The commencing point for Internet of Things applications are the things itself. These kinds of devices have no such screen (this is not the case always), a processor with low-power, some fixed operating system, and a communication method, which uses one or more communication protocols. These things can directly connect them to the Internet and the Internet gateway devices that are typically a plastic box having blinking lights.

The next step of the system is an ingestion tier, as it uses the organized data and processes the same. In the last step, the end-user tier acts as an application that is visible to the end-user and easy to communicate. It can include a mobile app, enterprise application, or maybe, a web app.

If you are looking forward to developing an IoT application, focus on these last two steps more.

It would be a better option to develop IoT solutions on top of a ready-made “Internet of Things platform,” says Frank Gillet, a principal analyst at Forrester. These top platforms involve an ingestion tier that performs the work of time-series archiving for incoming data. It also works as an analytics tier that performs management capabilities, provisioning, a real-time message bus, and an API that allows communication between the platform and the applications constructed on top of it.

Developing an IoT platform from zero is a difficult task:

California based On-Farm made use of Thingworx cloud-based IoT platform for developing its web-based information application. It gathers data from a wide range of connected things, like soil moisture sensors, and merges it with data from other sources, like weather information providers.

How does the IoT Development platform work:

It is plain sailing to IoT app development, as per the Buglabs’ systems. Any application or the device is allowed to “follow” the device, which is Dweeting (this word is made by joining the words “device” and “tweeting”) and using the data. A dweet may have a payload of around 2000 characters. For getting a device Dweeting, you require someone who has C language skills if it is running an embedded operating system.

For example, if a device like a vending machine running on a Linux operating system, the coding can be written either in Java or C++, as said by Semmelhack.

When dweets are used, Buglabs acts like a broker, receiving the dweets and later sending them wherever you like. Buglabs does not store the data, but it provides APIs for places to keep it. You also have the option to run your application server on Salesforce. It will be an API call to us; you will be able to access the data (wherever it is stored).

Here are some of the areas that got rapid growth by implementing IoT Solutions; check out these verticals-

This industry opened up various chances to develop applications related to the Internet of Things. These trade procedure branches act as intelligent shopping, and supply chain control is most productive for building high-end IoT software.

It is one of the most viable areas for executing IoT. by using passive and active RFID tags equipped with antennas, integrated chips, and GPS trackers, these apps offer an integrated method to track the transported good’s location. To change the data gathered from sensors, leading logistic companies to hire developers to create highly specialized software dependent on IoT Solutions.

The machine-to-machine principle was the IoT concept prototype with a basic structure that implies the middleware used for data processing, unlike M2M. It has become an indispensable element of industrial software in the current years. You can take production task implementation to add asset management systems, digital product quality control systems, and production equipment management systems.

So, it will not be wrong to say that the Internet of Things app development is not a difficult task- if you desire to take benefits of different platforms that have already been developed for this work. IoT app development is more or less the same as developing other types of applications. We, BR Softech, as a leading IoT application development company, are here to provide you IoT development services.

We help you build IoT applications from scratch, and various IoT platforms have been developed over the last few years. We will provide you different areas for IoT apps and a vast selection of programming languages and platforms for building such IoT apps. Also, we have expert professionals with numerous resources and skills to provide you with fruitful outcomes.